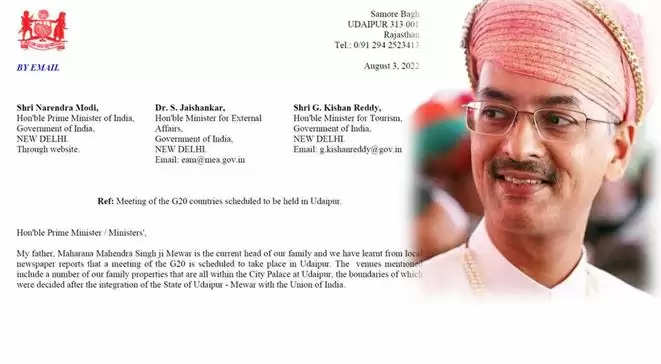 Vishvaraj Singh Mewar, son of Mahindra Singhji Mewar of the erstwhile Udaipur Royal family, has raised an objection over the selection of venues for the upcoming G20 Sherpa Meet in Udaipur in December.  The objection pertains to properties located within premises of the Udaipur City Palace. The objection was raised vide a letter dated 3 August 2022 (in possession of UdaipurTimes) jointly addressed to the Prime Minister Narendra Modi; Minister of External Affairs, Dr. S Jaishankar and Minister for Tourism, G Kishan Reddy. The letter was sent through email to the two Union Ministers, a copy of the letter was uploaded on the PMO Website.

In his letter, Singh mentioned that "the family properties have been held to be that of the Hindu United Family (HUF) by the District Court of Udaipur vide the Court order dted June 30, 2020, in their family's partition suit #14/11 filed on April 22, 1983. The family's litigation has over the years and this order specifically has been reported by the local, state and national media. The order has been stayed and is pending appeal in proceeding bearing no.420/20 before the  High Court of Rajasthan at Jodhpur, however orders of status quo over the entire suit properties continue."

Vishvaraj Singh, in his letter urged the Prime Minister to note that the transfer and use of some of the properties by commercial and other entities has been challenged in these proceedings, while some of the properties have been accepted by all parties to have not been transferred to any entity whatsoever. The joint family (HUF) status of the family estate has also earlier been upheld by an order dated December 17, 1981, of the Income Tax Appellate Tribunal Bombay Bench 'A' IRA No. 459, 460, 461/JP/1979, which was never appealed against. The status of HUF has also been accepted by various taxation authorities and in other proceedings before the High Court of Rajasthan at Jodhpur.

Vishvaraj Singh said that all these last three months, he was waiting for cogniscance and a suitable reply from those to whom the letter was addressed. Having recieved no response, Vishvaraj Singh chose to make his concern and argument public.

He also highlighted that his father, Maharana Mahendra Singhi Mewar is the Karta of the family HUF according to Hindu Law and should the press reports be true it would be a violation of the families rights as citizens of this country that such an event can be organized without any interaction with the owners. In the letter, Vishvaraj Singh has also questioned that duty of those holding high offices to safeguard the dignity of the offices they represent, and the offices held by their invitees, by not associating with activities that are at the very least under adjudication and highly controversial.

'However, it is made clear that till decision of the appeals, appellant shall be bound to obey directions issued by the District Judge, Udaipur  vide Order dated 02.12.1985 passed in Civil Misc. Case No.80/1983 “Maharaj Kumar Mahendra Singh Ji Vs. Maharana Bhagwat Singh Ji (Expired) & Ors.” and confirmed with some modification by this Court vide Judgment dated 11.06.1983 passed in S.B. Civil Misc. Appeal No. 179/1986 “Shri Mahendra Singh Vs. Shri Arvind Singh & Ors”'.

Notably the G-20 Sherpa Summit is scheduled to be held at Udaipur between 5-7 December. The global event will be held at various properties of City Palace of the Udaipur including Darbar Hall, Manak Chowk and Jag Mandir. Over 300 guests, participants and dignitaries holding very high government offices from 20 countries will take part in the three day event. Preparations by the venue partners and the Udaipur administration as well as law and order team are in their final stages. The administration has set a deadline of 30 November to complete all procedural, security and logistic arrangements  in an effort to make the G20 Sherpa Meet 2022 a success.