Inqury against the SHOs of 17 police stations of the state including Udaipur ordered.

A decoy operations haa been launched by the vigilance wing of Rajasthan in 11 districts of the state that has been found in failing to comply with the government's order of ban on liquor sale after 8 pm.This list includes 17 police stations including Hiran Magri police station of Udaipur.

An inqury has been also against the SHOs of these police stations. 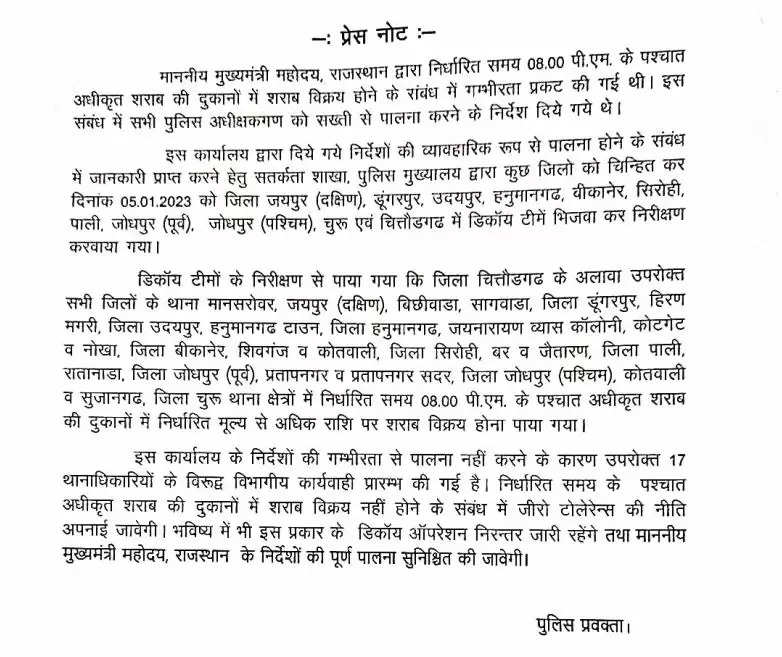 This came after when the CM Ashok Gehlot ordered the police officers to ensure that liqour should not be sold after 8 pm.Following the orders decoy teams were sent to various districts including Jaipur (South), Dungarpur, Udaipur, Hanumangarh, Bikaner, Sirohi, Pali, Jodhpur, Chittorgarh and Churu on 5th January.

As per the orders it was found by the decoy teams that liqour is not only sold after 8 pm but also sold at higher prices than their fixed prices.

As per the officials the operations will continue and the police will adopt zero tolarence policy during the decoy operations and will ensure ban on the sale of liqour after 8 pm.