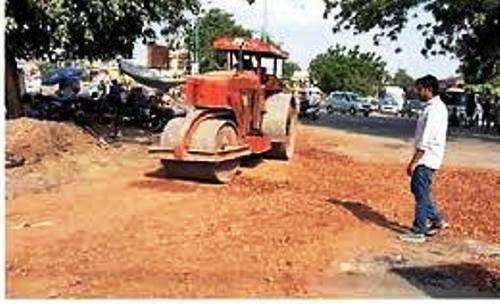 A budget of 3 crore rupees has been approved for the repair of the roads in Udaipur. UIT has formed 16 teams for the project. Hoping that quality material will be used and no more cable line or sewerage work will damage the roads again, (at least not in the near future).

After various protests and show-downs and mockery on social media and even legal notices to administration, the authorities came into action and finalised a budget of 3 crore rupees to repair the worn and torn roads in the city. It may be noted that the condition of roads in the city has become too pathetic and is also one of the main reasons of accidents since there are too many pot holes which got covered with water in the monsoon season.

UIT has formed 16 teams on the directives of District Collector for the maintenance work. Work is in progress for the roads in Pratapnagar, Pratapnagar to Bhuwana bypass, Krishi Mandi area, Shrinath nagar, G-block, Phuta Talab road in Sector 14, Manva Kheda-Eklingpura road and area behind Celebration Mall in Bhuwana. UIT Circle area is also on the agenda. Since too much water fills up in this area, it has been decided to make CC roads instead of tar roads. It has been informed that if it doesn’t rain in the coming days, roads in a lot of areas falling under UIT will be mended within 7 days. Municipal Corporation has also begun a patchwork at Surajpole. Roads of Sector 13, 14 and Pula area are also being repaired.

Hoping that this time, attention will be paid towards good quality work and no make-shift arrangements will be done.