FIR has been registered under UAPA, Explosive Substaces Act and Railways Act 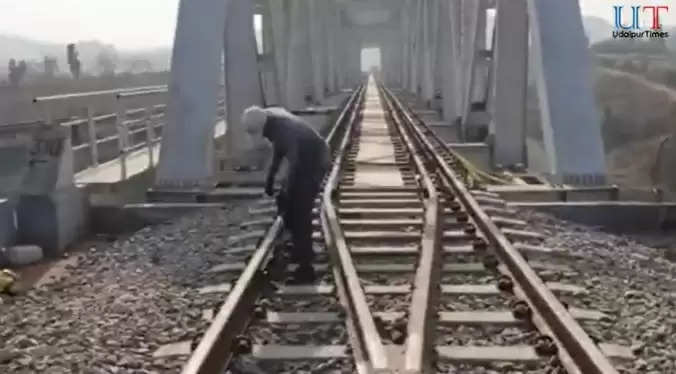 Udaipur is once again in the spotlight for the wrong reasons. While the city is preparing on war front for the upcoming G-20 Sherpa Meet, an incident of explosion on the Udaipur - Ahmedabad (Asarwa) rail track near Udaipur has taken put the law and order team on its feet.

Most of the national and state security agencies, viz. National Investigation Agency (NIA), Investigation Agency (IB), Anti Terrorist Squad (ATS) were immediately summoned to Udaipur, to investigate the incident, which has happened at a crucial time, when the Gujarat elections are due and when Udaipur is hosting the G-20 Sherpa Meet in December. The Special Operations Group (SOG) has also been called in to join the ongoing probe of the blast.

Additonal Deputy General of Police, Rajasthan, Ashok Rathore also visited the crime scene on Tuesday, where he interacted with the investigating teams.

The explosion, which took place at the Oda Railway bridge, 25km from Udaipur late night on Saturday, occured just a few hours before the newly launched Asarva –Udaipur train was scheduled to cross.  This much awaited train service in the region was launched by Prime Minister Narendra Modi on 31 October.

ADGP Rathore, while talking to media said that the case will be addressed on war front and brought to a swift conclusion. He added that various aspects to the investigation have been discussed on the spot and while a few questions still remain unanswered, the efforts are in place. An open discussion will be soon held and brain storming will be done following which the more clarity will be achieved, he said.

FIR has been has been registered various provisions of Unlawful Activities Prevention ACT (UAPA) including Section 16 & 18  and Explosive Substances Act 1908 and Railways Act.

When questioned about the criminal intent behind the incident, ADGP Rathore affirmed that it was an attempt to disrupt and sabotage and that there is no doubt about it.  He clarified that it is too early to say wether any organization or a group is behind the incident.  This will obviously be clear when the investigations arrive at logical and rational conclusion. The police is continuously questioning various suspects and informants in relation to the explosion. As per recent information, the investigation agencies have detained around 7 people for questioning in the matter.

The incident was reported in the morning of 13 November, Sunday, when one of the locals, after hearing an explosion went to the Oda bridge. The Oda bridge is around 25 kilometers away from Udaipur city. He then raised an alarm after he spotted that the railway tracks were having major crack and few of the screws and nuts were also found missing.

A team from Zawar Mines Police Station led by the SHO Anil Bishnoi rushed to the scene and after intimating the railway authorities to cease the train operations on the track, initiated an investigation. Initially a few parts of local detonators were recovered from the scene. Later, Divisional Commissioner Rajendra Bhatt along with District Collector Tara Chand Meena and Udaipur SP VIkas Sharma also visited the site and subsequently teams from other national as well as state security agencies including  NIA and ATS also reached Udapiur for investigation of the matter.

The Chief Minister Ashok Gehlot and Union Railways Minister Ashwini Vaishnaw also released statements on social media, condemning the incident.  The railways team from NW division, Ajmer arrived at the scene later in the evening and the track was repaired in a record time of 5 hours, in which the team worked into the late night hours, with no natural light support.